This article in Vice, later picked up by the Daily Mail, is about a guy named Derek Nance (two first names!) in Kentucky who only eats raw meat.

By analyzing the tone of the authors’ presentation, we can infer some general culinary taboos and notions of acceptable Slow Food behavior. When faced with the fact that an animal must be purchased, killed, carved up, and then refrigerated, the authors revert to a distressing discourse of taboo, pollution, and ostracization. I would also argue that more specifically, the authors are distancing themselves from a person that would deign to assert control of a very ancient and basic nutritional practice. Big Ag and the industrial food system require conformity for commodification, so anyone stepping out of the grid is generally subject to the language of weirdness and elitism.

First, the picture. It’s a brilliant piece of imagery; feeding the disgust felt by people when confronted with the pervasive blood-taboo of food. It’s like watching a pride of lions lazily noshing on a zebra during a generic animal program. Blood smeared all over their muzzles, flies buzzing around, some haughty British voice narrating. Even Ace Ventura 2: When Nature Calls gets a solid laugh out of that very image, so you know I’m bringing the hard social science, SON.

I understand Vice’s (and the Daily Mail’s) effort to push page views, but Derek’s teeth could not possibly ALWAYS be red (unless he had a habit of chewing betel nuts); the Vice author, Julian Morgan, who is also the photographer, obviously took this picture as he was eating something dripping with blood, like a liver, or maybe a spleen. (Essentially, an “off” cut, something the majority of meat eaters would have never even come across nor have considered eating.) My studies of teeth in osteology and forensic anthropology bias me toward the streetlight effect, but the [Vice] author puts Derek’s bloody rictus before any text appears. Teeth are not only a valuable postmortem bioarchaeological analytical medium; they are an indicator of dietary patterns, nutritional surfeit/scarcity, a crucial step in digestion*, and most pertinently for our discussion: an indicator of social standing.

I used to be extremely self-conscious of my Michael Strahan tooth gap. It didn’t match the uninterrupted grills of my orthodontia-blessed classmates. Personal hang-ups aside, I was keenly aware that perfect, straight teeth were societally desired. Now, I don’t really give a shit about how my teeth look, but I will say that when I drink red wine, I look like a jack-o-lantern. Good or bad, we judge teeth, as they are immediate indicators of health and social standing. Historically, gap-toothed women were thought of as super-horny pole smokers. Let’s see, you’ve got Chaucer’s Wife of Bath, Madonna, and Condoleeza Rice, so, check, check, and che-MADAM SECRETARY I HAD NO IDEA!!! 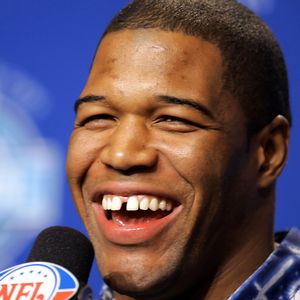 Kickers for the NY Giants used those chompers for field goal practice.

American stereotyping of bad British teeth is as pervasive (and as clichéd) as saying all British food is bad. Recovering meth addicts have a hard time adjusting to a world without Breaking Bad a society equating teeth with health and reliability. Bloody teeth, as seen above, connote savagery; a fell divergence from a civilized society that would prefer we didn’t chomp bloody meat, let alone do it with our mouths open. The chosen photograph opens with a salvo of the raw-meat-as-savagery narrative.

In a nutshell, the article discusses Derek being unable to eat anything without losing weight and getting sick. After trying everything from gluten-free to vegan, he discovered a raw meat diet, and subsequently bought, slaughtered, and stored his own animals. As the author puts it:

“For reasons I don’t properly understand I wanted to watch Derek eat a meal and he obliged.”

Ooooohhhh shit, sarcasm BURN, y’all! You know, just in case you guys thought the AUTHOR was some raw meat eating freak show, guys! I don’t think it’s malicious intent on the author’s side, per se, but the weirdo-distancing from the subject matter is evident. Doing one’s job as a journalist could also be “a reason” when “reporting” “stories.”

Derek’s methods, in his own words:

“I’m into lamb mainly. It’s just easy to go out to farms, barter over a decent price, slaughter it and throw it in the truck. It’s a lot harder to deal with beef because it’s a lot bigger. Pigs are kind of a no-no because they shoot them full of hormones and raise them on grains, which promote bacterial growth.”

Hmmm, sounds pretty awesome. Sounds like the epitome of Slow Food and off-the-grid independence. He’s even discerning in his meat choices, as well as completely knowledgeable about the product! The interviewer asks if Derek is “comfortable personally slaughtering animals,” and the response:

“Well if an animal lives in accordance with its nature, I have no problem ethically slaughtering that animal. But if you raise that animal in a pen and when it’s sick just shoot it up with antibiotics, I have real problems with that. It’s not just unfair on the animal; it’s unfair on the people who eat it.”

The industrial food bias is evident in the author’s question. God forbid someone be “personally” comfortable with animal slaughtering! That’s a job for a faceless factory worker, or a farmer! (Note: the existence of small, sustainable, locally-focused family farms is only a rumor at this point, like a unicorn, or a reasonable Republican.) My master’s thesis was about this very idea of cognitive dissonance in industrial meat eating. Perhaps if you’re not comfortable with someone “personally” slaughtering an animal, then you yourself shouldn’t be eating meat?

Derek then shows off his meat fridge, which the author refers to as his “Jeffrey Dahmer fridge.” ROFLMAO WILL THE SARCASTIC BON MOTS EVER STOP?!! Granted, no one likes a stuffy egghead pointing out how this or that is offensive and culturally relativistic, and there’s the real potential of the Dahmer crack being an offhand joke, but I bristle at equating raw meat storage (and consumption) with cannibalism. Would the author make the same crack about a plate of carpaccio, a tower of tartare, or a sushi spread?

The Daily Mail version is more or less similar to the original copy, with a few differences. The author, Sadie Whitelocks (more like WhiteCOCKS! See? I can make little asides, too!) refers to Derek’s “bizarre food addiction.” With a hat tip to Lévi-Strauss, that which makes the food “bizarre” and in the realm of inedible is not the duality of raw/cooked; it’s because the raw food in question is meat rather than plant matter. Raw food diets are currently quite popular, but I doubt Derek would be welcome to one of their potlucks.

My issues with the authors’ attitudes stem from the fact that Derek Nance is practicing Slow Food, but not in the cool way of boutique butcher shops and urban sustainable eco-charcuterie-with-an-Italio-Franco-Japanese-fusion-flair. He’s a guy in Kentucky hacking up lambs and eating them raw like he’s some Odyssey-reading villain on an episode of Justified. It would be more fruitful to use Derek’s dietary practice as an example of how Slow Food is not just the realm of the elite, but if that were the reality I wouldn’t be writing this.

Derek is seizing control over his health (as was initially intended) and over his local foodshed. Too much of the hand-wringing and finger-pointing about the state of fatties in the US addresses the symptoms, not the causes of the obesity crisis. It’s painfully simple advice to get off the couch, move around, grow a garden, and cook, but that doesn’t move pharmaceuticals or diet programs. (This doesn’t take into account certain urban settings that – because of extant discriminatory social systems – cannot easily grow or access healthy options). Derek’s actions should be celebrated; he’s not only butchering his own meat, which is very de rigueur, but he’s living with a vegan girlfriend, meaning he’s not some judgmental meat-chauvinist. Plus, on his YouTube channel he constantly comments on how George Michael is a musical god and Britney is overrated compared to Rihanna. So awesome.

How is it considered odd when someone eats nose-to-tail, whereas it’s normal to eat an ammonia-drenched and tortured beef patty from 100 different cows? I love that this example shows the vast and paradoxical richness to food studies: in one breath meat is a cultural artifact representing humanity, while in another it becomes equated with beastly barbarity.

*I don’t want to say “the first step in digestion,” because with the advent of tool usage and controlled fire, primates were able to “externalize” their teeth and their digestive organs. Knives saved our teeth from doing all the chewing, and fire made meat (and biomass) easier to digest. If you demand even more toothsome cultural anthropology, you could also make a case for the DECISION to start the fire, to hunt, to create a social system of feeding, all being important steps in digestion. Taking it a step further, all of this technology, from knives to blenders, has made teeth somewhat optional. We could eat blended food all day! What a world!

For a good read, check out: